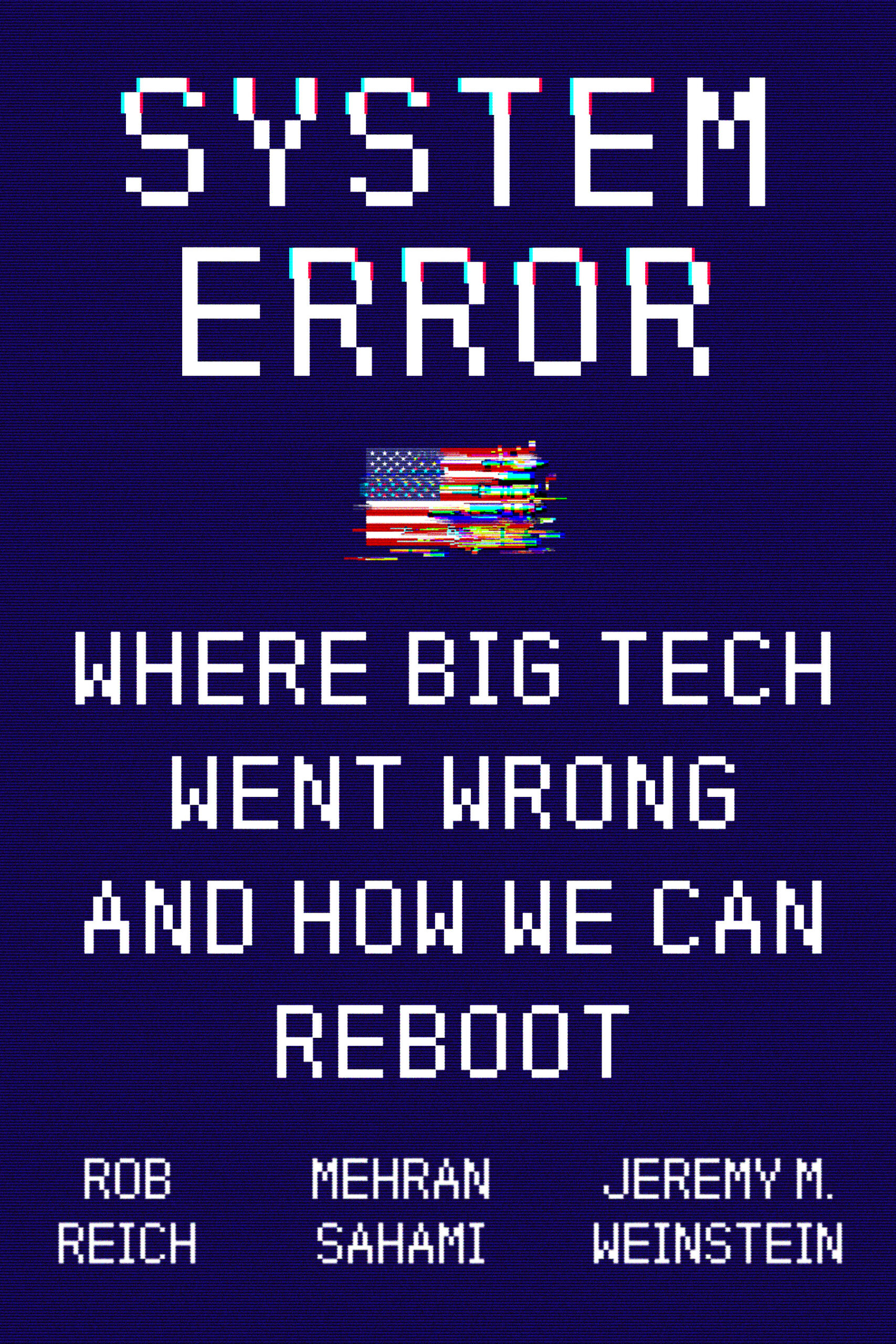 A forward-thinking manifesto from three Stanford professors—experts who have worked at ground zero of the tech revolution for decades—which reveals how Big Tech’s obsession with optimization and efficiency has sacrificed fundamental human values and outlines steps we can take to change course, renew our democracy, and save ourselves. 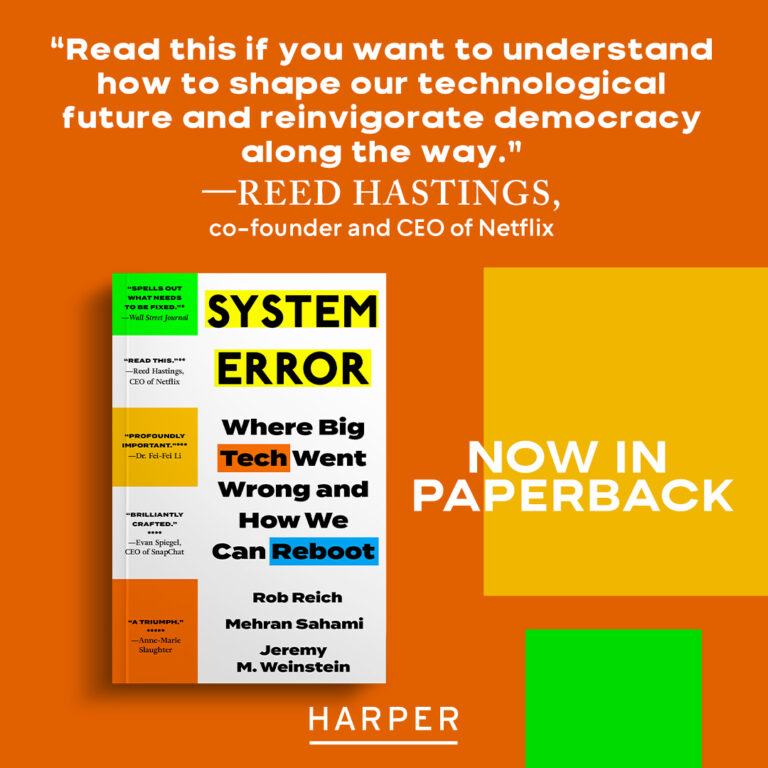 System Error: Where Big Tech Went Wrong and How We Can Reboot by Rob Reich, Mehran Sahami, and Jeremy Weinstein.

System Error:
Where Big Tech Went Wrong And How We Can Reboot

A forward-thinking manifesto from three Stanford professors—experts who have worked at ground zero of the tech revolution for decades—which reveals how Big Tech’s obsession with optimization and efficiency has sacrificed fundamental human values and outlines steps we can take to change course, renew our democracy, and save ourselves.
Read More

Rob Reich is a philosopher, the director of Stanford University’s Center for Ethics in Society, co-director of the Center on Philanthropy and Civil Society, and associate director of its new Institute for Human-Centered Artificial Intelligence. He is a leading thinker at the intersection of ethics and technology and the author of Just Giving: Why Philanthropy is Failing Democracy and How It Can Do Better. A former sixth grade teacher, he has won multiple teaching awards at Stanford. He helped to create the global movement #GivingTuesday and serves as chair of its board.

Mehran Sahami was recruited to Google in its start-up days by Sergey Brin and is one of the inventors of email spam-filtering technology. With a background in machine learning and artificial intelligence, he returned to Stanford as a computer science professor in 2007 and now holds the James and Ellenor Chesebrough Professorship in Engineering. As the associate chair for education in the computer science department, he helped redesign the program’s undergraduate curriculum. He is one of the instructors of Stanford’s massive introductory computer programming course taken by nearly 1,500 students per year. Mehran is also a limited partner in several VC funds and serves as an adviser to high-tech start-ups.

Jeremy M. Weinstein, a political scientist, went to Washington with President Obama in 2009. A key staffer in the White House, he foresaw how new technologies might remake the relationship between governments and citizens and launched Obama’s Open Government Partnership. When Samantha Power was appointed US Ambassador to the United Nations, she brought Jeremy to New York, first as her chief of staff and then as her deputy. He returned to Stanford in 2015 as a professor of political science, where he now leads Stanford Impact Labs, a major university initiative that partners research teams with leaders in the public, private, and social sectors to tackle important social problems. He is a prizewinning author and a decorated teacher whose expertise spans domestic politics and U.S. foreign policy.

Enough with the breathless dreams of digital utopias and poisonous polemics about technological dystopias! In System Error, we finally have a book about the digital revolution that is serious rather than sensationalistic. Read this if you want to understand how to shape our technological future and reinvigorate democracy along the way.
Reed Hastings
Co-Founder And CEO, Netflix
A powerful account of how our lives, our politics, and our values have been reshaped by technology in ways that we are just starting to comprehend. This remarkable book charts a path forward for creating a healthy digital future.
Darren Walker
President, Ford Foundation
A profoundly important book that examines the ethical and societal impact of the digital technologies. A must-read for every student, engineer, businessperson, policymaker, or anyone who cares about our society's collective future.
Dr. Fei-Fei Li
PROFESSOR OF COMPUTER SCIENCE, CO-DIRECTOR, STANFORD INSTITUTE FOR HUMAN-CENTERED AI
An analysis of the critical challenges facing our digital society that is as accessible as it is sophisticated. Best of all, the authors offer actual solutions for a reboot that are both timely and feasible.
Anne-Marie Slaughter
CEO, New America
It's not about the obvious villains. This wise, nuanced, quietly brilliant book reveals how technology is reshaping our society and our values in ways that are insidious, hidden—sometimes even from their inventors—and far more fascinating. Anyone who believes this reshaping shouldn't be entrusted to private companies needs to read it. Now.
Larissa MacFarquhar
author, Strangers Drowning: Impossible Idealism, Drastic Choices, and the Urge to Help
System Error is a powerful and important, timely book. It feels like a public service you have done for us, and I encourage everyone to pick up a copy.
Julian Castro
Former Secretary of Housing and Urban Development
System Error is a must read for every software engineer in the U.S.
Gabe Kleinman via Twitter
Head of portfolio and marketing services, obvious ventures

Please provide your email address to hear about future events and activities.